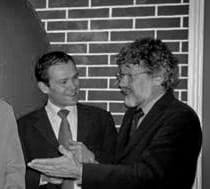 In September 1995,Stéphane FRIMAUDEAU set up the Cocktail Régie SARL, a communication society he became the manager of.

The society has the exclusive commercial control of 5 FM radio frequencies in the department, with majority holding of Bernard FRIMAUDEAU, his father. His activity focusses on the sale of advertising spaces on the above-mentioned frequencies..

In 2005, Stéphane FRIMAUDEAU decided to install his first digital billboards in urban areas. After the sound, it's time for the picture.

This was an unprecedented pioneering step in France.

HERALDING THE BIRTH OF COCKTAIL VISION, THE FIRST DIGITAL ADVERTISING DISPLAY IN THE WEST OF FRANCE.

The first devices were out La Roche-sur-Yon, the birth town of the Cocktail Régie SARL.

Consequently, of which a network across the Vendean territory was provided with screens at les Sables d’Olonne, lesHerbiers, Fontenay-le-Comte and Challans.

Its success led to its expansion beyond the department’s limit. A new structure was then created in 2008: The Cocktail Development SAS.

This was the real take-off of the Cocktail Vision mark which landed at the towns or Cholet, Pau, Tarbes, Bressuire, Niort and Thouars.

At the same time, thanks to its experience and know-how the Cocktail Vision group proposed an increasing offer of outdoor and indoor digital display screens for sale or rent, meant for public and private sectors.

In developed steadily: Cocktail Vision purchased Pixity society in august 2017 and has been since the leading network in France, with more than 150 devices, across more than 30 departments, a long way indeed within 13 years.

To insure and reinforce this growth, the group now employs about 40 people collaborating daily to the development of Cocktail Vision mark (recruitments in all jobs are being performed)